Everyone is a negotiator. Whether we’re deciding what to do on the weekend with our spouse, discussing chores or homework with our children, or asking for a raise at work, we need to make deals with others almost every day.

We may not be particularly good at it, however. We state our position, the other side states theirs, then we come to some compromise that lies along the line between the two. In Getting to Yes: Negotiating Agreement Without Giving In, Roger Fisher and William Ury explain the limitations of this approach:

“All too often negotiators end up like the proverbial children who quarrelled over an orange. After they finally agreed to divide the orange in half, the first child took one half, ate the fruit, and threw away the peel, while the other threw away the fruit and used the peel from the second half in baking a cake.”

By focusing on positions we lose sight of what each side actually wants. Haggling back and forth is a slow, inefficient process. It’s hard to abandon positions to which we have previously committed without losing losing face and feeling resentful.

Instead, the authors propose an approach that focuses on identifying interests, generating options, and using objective criteria to resolve conflicts, dealing with people problems separately from the issue under discussion. The goal is to reach a fair, durable agreement that satisfies everyone’s interests, while improving the relationship – or at least, not damaging it.

Instead of arguing over positions (statements of what we want) Fisher and Ury advocate looking for the interests that underlie those positions (the reasons why we want what we want).

Interests are easier to reconcile than positions. Each interest may have multiple positions that satisfy it, and behind every opposed position may be several shared or differing interests, not only conflicting ones.

To determine interests, we should ask why the other side hold the positions that they do, and why they should not do so. What basic needs – status, certainty, autonomy, relatedness, fairness – are they trying to satisfy? If their interests are monetary, why is that money so important to them?

“Ask yourself: Do we have a shared interest in preserving our relationship? What opportunities lie ahead for cooperation and mutual benefit? What costs would we bear if negotiations broke off? Are there common principles, like a fair price, that we both can respect?”

“Look for items that are of low cost to you and high benefit to them, and vice versa. Differences in interests, priorities, beliefs, forecasts and attitudes toward risk all make dovetailing possible.”

Reaching agreement is much harder unless we understand the other side’s interests first.

The next step is to brainstorm multiple solutions that might satisfy their interests and our own.

Shared interests should be handled by making them explicit and formulating them as shared goals. Repeatedly emphasising them during the course of negotiations can help keep things amicable.

Differing interests are often key to generating solutions that enable both sides get what they want. In the example with the orange, one child was interested in the peel, the other in the fruit. Agreements are often possible because the two sides want different things.

One way to generate options is to start with the problem we are trying to solve, then analyse it to look for causes. From there, we look for broad theoretical approaches that might address these, then look for concrete action ideas to put these approaches into practice. 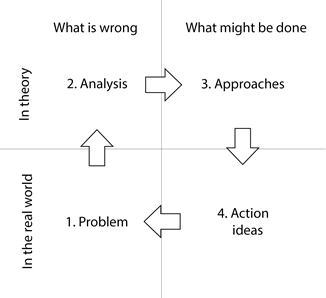 It can also be useful to generate options of different strengths, with weaker options as alternatives should a stronger one prove unpalatable.

It’s important to ensure that the options will satisfy the other side’s interests as well as our own. It’s a mistake to think that “solving their problem is their problem”:

“Since success for you in a negotiation depends upon the other side’s making a decision you want, you should do what you can to make that decision an easy one.”

Solutions that are fair, legal and honourable are easier to accept, as are those that are consistent with agreements they have made before. We should understand what the consequences will be to them if they adopt our proposal, and strive to improve those consequences for them.

The ability to invent options is one of the most valuable skills that a negotiator can have.

Use objective criteria to resolve conflicts

The best way to deal with conflicting interests is to use objective criteria to resolve the disagreement.

“The more you bring standards of fairness, efficiency, or scientific merit to bear on your particular problem, the more likely you are to produce a final package that is wise and fair. The more you and the other side refer to precedent and community practice, the greater your chance of benefiting from past experience. And an agreement consistent with precedent is less vulnerable to attack.”

Engaging in a battle of wills over conflicting positions can damage the relationship. Standards make it easier to back down.

“What makes conceding particularly difficult is having to accept someone else’s proposal. If they suggested the standard, their deferring to it is not an act of weakness but an act of strength, of carrying out their word.”

Objective criteria can either be fair standards by which an agreement will be evaluated (such as market value, depreciated cost, moral standards or precedent) or fair procedures that can be followed (such as taking turns, drawing lots or letting someone else decide).

“Consider, for example, the age-old way to divide a piece of cake between two children: one cuts and the other chooses. Neither can complain about an unfair division.”

We should frame each issue as a joint search for an objective standard, but keep an open mind about what that standard should be:

“Insisting that an agreement be based on objective criteria does not mean insisting that it be based solely on the criterion you advance. One standard of legitimacy does not preclude the existence of others. What the other side believes to be fair may not be what you believe to be fair…

When each party is advancing a different standard, look for an objective basis for deciding between them, such as which standard has been used by the parties in the past or which standard is more widely applied.”

“Pressure can take many forms: a bribe, a threat, a manipulative appeal to trust, or a simple refusal to budge. In all these cases, the principled response is the same: invite them to state their reasoning, suggest objective criteria you think apply, and refuse to budge except on this basis.”

To counter the risk of accepting an agreement that should be rejected, we may set a bottom line before starting a negotiation. The problem with bottom lines, however, is that they tend to be arbitrary and, by definition, inflexible. They may be overly optimistic about what it is possible to achieve (causing us to reject a proposal we should accept), or overly pessimistic (causing us to accept a proposal we should reject).

A better approach is to judge every proposal against our BATNA – our Best Alternative To a Negotiated Agreement. Our BATNA is what we would do if no agreement was reached. The stronger our BATNA, the easier it is for us to walk away, so the stronger our hand.

We should be careful when determining our BATNA:

“One frequent mistake is psychologically to see your alternatives in the aggregate. You may be telling yourself that if you do not reach agreement on a salary for this job, you could always go to California, or go south, or go back to school, or write, or work on a farm, or live in Paris, or do something else. In your mind you are likely to find the sum of these alternatives more attractive than working for a specific salary in a particular job. The difficulty is that you cannot have the sum total of all those other alternatives; if you fail to reach agreement, you will have to choose just one.”

If a proposal is less attractive than what we would actually do in the absence of an agreement, we should reject it. If it’s more attractive, we should consider accepting it.

“You should not expect success in negotiation unless you are able to make the other side an offer they find more attractive than their BATNA.”

If both sides have good BATNAs it may be better for both to not reach agreement.

Negotiators are people. They can get angry, fearful and sad. They may misinterpret things that are said, overreact, or take things personally. They may mistake their perception for reality.

Fisher and Ury advocate handling these people problems separately from the main issue, by changing the way we treat the other side rather than making concessions.

"Making an unjustified concession now is unlikely to make it easier to deal with future differences. You may think that next time it is their turn to make a concession; they are likely to believe that if they are stubborn enough you will again give in.”

Dealing with perception problems requires us to put ourselves into the other side’s shoes and look at the problem as they see it. We should avoid letting our fears cause us to makes assumptions about their intentions. Perceptions should be discussed openly, and we should look for opportunities to act inconsistently with theirs. We should take care to involve the other side in the process so they feel that they have a stake in it.

Emotions should be explicitly recognised and  acknowledged as legitimate. We should understand where they are coming from and encourage the other side to vent, while refusing to be drawn in to an argument. Symbolic gestures may help.

Communication problems arise when one side is not listening, one side is not talking, or there are misunderstandings about what is being said. The solution is to seek first to understand, then to be understood. When listening, we should be able to explain the other side’s point of view as well as they can, even though we may not agree with it. When talking, we should avoid focusing on what they did, instead explaining its impact on us.

Getting to Yes: Negotiating Agreement Without Giving In is a short but dense book, packed with practical advice on how to reach wise agreements.