Final Confluence
About
“Looking Outward Together”
Scott Peck on Love 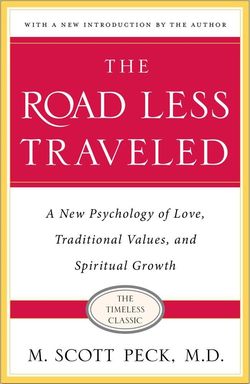 So begins psychiatrist Scott Peck's exploration of personal growth in The Road Less Traveled: A New Psychology of Love, Traditional Values and Spiritual Growth. The book considers the role of discipline, love and faith in our mental and spiritual development and as the opening line suggests, is unafraid to remind us of some fundamental truths that our self-centred, pleasure-seeking culture often minimises.

“Most do not fully see this truth that life is difficult. Instead they moan more or less incessantly, noisily or subtly, about the enormity of their problems, their burdens, and their difficulties as if life were generally easy, as if life should be easy…

Life is a series of problems. Do we want to moan about them or solve them?”

Peck goes further, however, asserting that overcoming problems is what gives life meaning:

Peck begins by looking at discipline, which he defines as a set of tools for solving life’s problems. He identifies four: delaying of gratification, acceptance of responsibility, dedication to the truth, and balancing.

“The problem lies not in the complexity of these tools but in the will to use them. For they are tools with which pain is confronted rather than avoided, and if one seeks to avoid legitimate suffering, then one will avoid the use of these tools.”

Delaying of gratification is being willing to tolerate some discomfort today for greater satisfaction later.

A desire to deal with problems as quickly as possible, or a belief that we are incapable of dealing with them at all, can indicate an inability to delay gratification. Peck describes a patient who was having difficulty with her children:

“[She] was a basically loving and dedicated but rather helpless mother to her two young children. She was alert and concerned enough to perceive when her children were having some sort of emotional problem or when something was not working out in her child-raising. But then she inevitably took one of two courses of action with the children: either she made the very first change that came to her mind within a matter of seconds—making them eat more breakfast or sending them to bed earlier— regardless of whether such a change had anything to do with the problem, or else she came to her next therapy session with me, despairing: “It’s beyond me. What shall I do?” This woman had a perfectly keen and analytical mind, and when she didn’t procrastinate, she was quite capable of solving complex problems at work . Yet when confronted with a personal problem, she behaved as if she were totally lacking in intelligence.”

“The issue was one of time. Once she became aware of a personal problem, she felt so discomfited that she demanded an immediate solution, and she was not willing to tolerate her discomfort long enough to analyze the problem. The solution to the problem represented gratification to her, but she was unable to delay this gratification for more than a minute or two, with the result that her solutions were usually inappropriate and her family in chronic turmoil.”

Similarly, Peck describes the first time he was able to fix a mechanical problem with a car after forcing himself to work through the problem slowly.

“Actually, I don’t begin to have the knowledge or the time to gain that knowledge to be able to fix most mechanical failures, given the fact that I choose to concentrate my time on nonmechanical matters. So I still usually go running to the nearest repairman. But I now know that this is a choice I make, and I am not cursed or genetically defective or otherwise incapacitated or impotent. And I know that I and anyone else who is not mentally defective can solve any problem if we are willing to take the time.”

The second tool in the toolbox of discipline is the acceptance of responsibility.

“We must accept responsibility for a problem before we can solve it. We cannot solve a problem by saying “It’s not my problem.” We cannot solve a problem by hoping that someone else will solve it for us. I can solve a problem only when I say “This is my problem and it’s up to me to solve it.” But many, so many, seek to avoid the pain of their problems by saying to themselves: “This problem was caused me by other people, or by social circumstances beyond my control, and therefore it is up to other people or society to solve this problem for me. It is not really my personal problem.”

Dedication to the truth

The third tool is dedication to the truth. We cannot hope to solve our problems if we are oblivious of, or lie to ourselves about, their nature. This means constantly examining ourselves, being willing to be challenged, and being completely honest.

We must take care to constantly revise our maps of reality as we acquire new information, however painful that process may be, lest we find ourselves using maps that once served us well but are now outdated. The best way to ensure our maps are accurate is to expose them to the criticism of others.

Dedication to the truth also means not lying to others, although Peck accepts that there are situations where withholding the truth is the kindest thing to do. However:

“The decision to withhold the truth should never be based on personal needs, such as a need for power, a need to be liked or a need to protect one’s map from challenge… [it] must always be based entirely upon the needs of the person or people from whom the truth is being withheld.”

The fourth and final tool of discipline is balancing, the ability to discipline discipline itself, to be flexible and act spontaneously. At its core, balancing is about giving things up, about trading off one thing against another. Sometimes we can become so attached to one thing that it damages our relationship with another. The ability to recognise when we are out of balance, and need to give something up to restore our balance, is essential for a happy life.

Giving something up is painful, but Peck argues that we should see this as a positive thing. To be mentally healthy we must grow, and growth requires the giving up of our old selves. The pain of giving up is thus an indicator that growth is happening.

One important kind of balancing that Peck refers to is "bracketing". He defines this as "the act of balancing the need for stability and assertion of the self with the need for new knowledge and greater understanding", and notes that this must be done "by temporarily giving up one's self so as to make room for the incorporation of new material into the self". Expressed another way, it's the ability to evaluate and assimilate new knowledge on its own terms, separated from our own preconceptions and emotional biases, the ability to view the world as others see it.

To summarise, Peck views discipline as a set of four tools - delaying gratification, accepting responsibility, a dedication to truth, and balancing - that enable us to solve the problems life throws our way. However, using these tools is difficult and requires motivation. Peck believes this motivation is provided by love. I’ll discuss his views on that subject next.