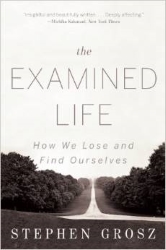 In The Examined Life: How We Lose and Find Ourselves, psychoanalyst Stephen Grosz elegantly illuminates our struggles with love, change and loss through a series of moving anecdotes about some of the patients he's seen during his career.

In "On Closure" Grosz argues that the common belief in "five stages of grief" - denial, anger, bargaining, depression and acceptance - is wrong.

"In the 1960s [Elisabeth] Kübler-Ross identified five psychological stages in the experience of terminally ill patients, the last of which is acceptance. About twenty-five years ago, Kübler-Ross and many bereavement counsellors began to use these same five stages to describe the experiences of both the dying and the grieving. I’ve long thought that Kübler-Ross was wrong."

While acknowledging that the initial shock and fear associated with a loss do decrease with time, Grosz argues that the idea that we can do something to achieve permanent closure is a fantasy.

"Holidays and anniversaries are notoriously difficult. Grief can ebb and then, without warning, resurge...

My experience is that closure is an extraordinarily compelling fantasy of mourning. It is the fiction that we can love, lose, suffer and then do something to permanently end our sorrow. We want to believe we can reach closure because grief can surprise and disorder us – even years after our loss."

This fantasy can have serious consequences for those who fall victim to it.

"They suffer more because they both expect to make progress, to move through certain stages of grief. And when they don’t, they feel that they are doing something wrong, or, more precisely, that there is something wrong with them. They suffer twice – first from grief and then from a tyranny of shoulds: ‘I should have pulled myself out of this,’ ‘I shouldn’t be so angry,’ ‘I should have moved on by now,’ and so forth. There is little room here for emotional exploration or understanding. This way of being leads to self-loathing, despair, depression."

The Examined Life is fascinating in its entirety.