Stephanie Coontz on the Changing Role of Marriage 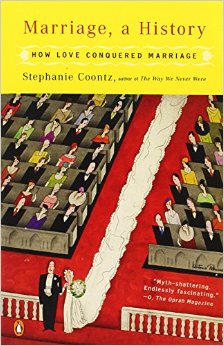 Marriage has existed for around five thousand years. But as Stephanie Coontz observes in the fascinating Marriage, a History: How Love Conquered Marriage, the idea that love should be the main reason for getting married has only been around for the last two hundred. Coontz presents compelling evidence of how this shift has rendered marriage more optional, fragile and risky than ever before, and illustrates the extent to which our ideas about love and marriage are determined by when and where we are born.

"For thousands of years, marriage served so many economic, political, and social functions that the individual needs and wishes of its members (especially women and children) took second place. Marriage was not about bringing two individuals together for love and intimacy, although that was sometimes a welcome side effect. Rather, the aim of marriage was to acquire useful in-laws and gain political or economic advantage. Only in the last two hundred years, as other economic and political institutions began to take over many of the roles once played by marriage, did Europeans and Americans begin to see marriage as a personal and private relationship that should fulfill their emotional and sexual desires. Once that happened, free choice became the societal norm for mate selection, love became the main reason for marriage, and a successful marriage came to be defined as one that met the needs of its members."

There are similarities between the institutions classified as marriages throughout history, but coming up with a common definition is difficult.

"Marriage usually determines rights and obligations connected to sexuality, gender roles, relationships with in-laws, and the legitimacy of children. It also gives the participants specific rights and roles within the larger society. It usually defines the mutual duties of husband and wife and often the duties of their respective families toward each other, and it makes those duties enforceable. It also allows the property and status of the couple or the household head to be passed down to the next generation in an orderly manner.

But marriage does not serve all these functions in any one society. Moreover, almost every single function that marriage fulfills in one society has been filled by some mechanism other than marriage in another."

Coontz provides numerous examples to illustrate how our current ideas about love and marriage, far from being timeless and universal, are specific to our culture and age.

“In the Chinese language the term love did not traditionally apply to feelings between husband and wife. It was used to describe an illicit, socially disapproved relationship. In the 1920s a group of intellectuals invented a new word for love between spouses because they thought such a radical new idea required its own special label.”

“In Europe, during the twelfth and thirteenth centuries, adultery became idealized as the highest form of love among the aristocracy. According to the Countess of Champagne, it was impossible for true love to “exert its powers between two people who are married to each other.””

In some societies today, too much love is considered a bad thing.

“In many peasant and working-class communities, too much love between husband and wife is seen as disruptive because it encourages the couple to withdraw from the wider web of dependence that makes the society work.”

Coontz provides some fascinating examples of how other cultures have regarded same-sex relationships.

These social gender roles completely overshadowed the actual biological sex of the partners. As a result, sexual relations between two people of the same sex, when one had chosen man’s work and the other woman’s work, would not have been considered homosexual, had an equivalent of that label even existed. But eyebrows would certainly have been raised at the idea of a man and a woman living together if both were playing the same work and gender roles.”

The ancient Greeks valued some homosexual relationships above heterosexual ones:

“The Greek model for true love was not the relationship between husband and wife. The truest love was held to exist in the association of an adult man with a much younger male.”

“People did not pick up the sexual connotations that often make even the most innocent expression of affection seem sexual to our sensibilities today. Perfectly respectable nineteenth-century women wrote to each other in terms like these: “[T]he expectation once more to see your face again, makes me feel hot and feverish.” They carved their initials into trees, set flowers in front of one another’s portraits, danced together, kissed, held hands, and endured intense jealousies over rivals or small slights.

Only at the end of the nineteenth century did physical expressions of affection between men begin to be interpreted as “homosexual,” and only in the early 1900s did ardent woman-to-woman bonds start to seem deviant.”

Coontz also reminds us that marriage is not a fundamentally religious institution. Not only does it pre-date the Christian church by several thousand years, “for the first eight centuries of its existence, the church itself showed little concern about what made for a valid marriage or divorce among the lower classes of society”.

The rise of the love match

When the idea of marrying for love started to emerge in the late eighteenth century, there were several factors that still acted to stabilise the institution. There was a belief that there were large, innate differences between men and women, and that marriage enabled them to gain the benefit of each other's unique abilities. There was no reliable contraception, so sex and child-bearing were still closely linked. There were penalties for illegitimacy. There were strong social controls on people's personal behaviour and penalties for non-conformity. Divorce was not readily available. Women were legally and economically dependent on men and men were domestically dependent on women.

One by one, these restraining factors fell away. Reliable contraception had a huge impact:

“The pill gave unmarried women a degree of sexual freedom that the sex radicals of the 1920s could only have dreamed of. But when a large number of married couples stopped having children, it also radically changed marriage itself. Not only did effective contraception allow wives to commit more of their lives to work, but it altered the relationship between husbands and wives. Without a constant round of small children competing for their attention, many couples were forced to reexamine their own relationships more carefully. In addition, the growing number of childless marriages weakened the connection between marriage and parenthood, eroding some of the traditional justifications for elevating marriage over all other relationships and limiting it to heterosexual couples.”

Improvements in healthcare and nutrition resulted in people living longer, and therefore being married longer.

“In England in 1711 the median age at death for men was thirty-two. By 1831 it had risen to forty-four. By 1861 it had reached forty-nine, and by the end of the century the median age of death was in the high fifties. “The average duration of marriage,” estimates historian Roderick Phillips, “increased from about fifteen to twenty years in preindustrial Europe to about thirty-five years in 1900.””

The erosion of the distinction between legitimacy and illegitimacy in the 1960s and 1970s, while reversing an ancient inequity, also stripped marriage of one of its traditional functions.

In parallel with these changes came a rise in individualism, in the belief that everyone is entitled to personal happiness and satisfaction. Marriage became freighted with increasingly high expectations: that it should provide sexual satisfaction, emotional intimacy, self-fulfilment, a sense of meaning and a source of fun. Married couples should be best friends and put each other above all other relationships. Each should provide the other with everything they need. Such a package of expectations, notes Coontz, is historically extremely rare.

As love became the main reason to marry, loveless marriages started to be seen as a problem. The idea that women might have to enter such a marriage just to survive economically was seen as unacceptable, and spurred demands for women’s rights. The risk of being trapped in a loveless marriage, if love and intimacy disappeared, prompted calls to make divorce easier.

“Evidence of a slippery slope leading directly from the celebration of free choice to the destruction of family life was provided by the mounting demands to liberalize divorce laws. In the mid-seventeenth century, the poet John Milton had already argued that incompatibility should be reason enough to declare a marriage contract broken. His view found little support in the seventeenth century but gained much broader backing in the eighteenth. By the end of the eighteenth century Sweden, Prussia, France, and Denmark had legalized divorce on the grounds of incompatibility…

The strongest opponents of divorce in the nineteenth century were traditionalists who disliked the exaltation of married love. They feared that making married love the center of people’s emotional lives would raise divorce rates, and they turned out to be right...

In 1891 a Cornell University professor made the preposterous prediction that if trends in the second half of the nineteenth century continued, by 1980 more marriages would end by divorce than by death. As it turned out, he was off by only ten years!”

Today, 43% of all first marriages in America end in divorce within fifteen years.

All these changes came to a head at the end of the twentieth century:

“In less than twenty years, the whole legal, political, and economic context of marriage was transformed. By the end of the 1970s women had access to legal rights, education, birth control, and decent jobs. Suddenly divorce was easy to get. At the same time, traditional family arrangements became more difficult to sustain in the new economy. And new sexual mores, growing tolerance for out-of-wedlock births, and rising aspirations for self-fulfillment changed the cultural milieu in which people made decisions about their personal relationships. During the 1980s and 1990s, all these changes came together to irrevocably transform the role of marriage in society at large and in people’s personal lives.”

Coontz does not argue that these changes are bad. “When a modern marriage is stable, it is so in a more appealing way than in the past,” she says. Her point is that marriage is no longer necessary:

“Marriage used to be… the gateway to adulthood and respectability and the best way for people to maximize their resources and pool labor. This is no longer the case. Marriage still allows two people to merge resources, divide tasks, and accumulate more capital than they could as singles. But it is not the only way they can invest in their future. In fact, it’s a riskier investment than it was in the past. The potential gains of getting married need to be weighed against the possibilities offered by staying single to pursue higher education or follow a better job. And the greater likelihood of eventual divorce reinforces the appeal of leaving your options open while investing in your own personal skills and experience.”

Marriage, a History: How Love Conquered Marriage is a fascinating read in its entirety.