Final Confluence
About
Neil Strauss on Monogamy, Polyamory and Marriage
Can Love Last? 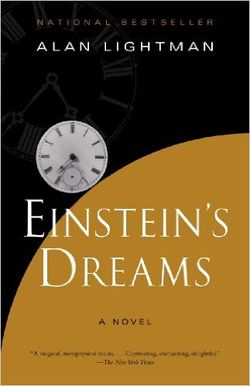 “There is only one cause of unhappiness,” says Anthony DeMello in The Way To Love. “The false beliefs you have in your head, beliefs so widespread, so commonly held, that it never occurs to you to question them.” Whether it’s the belief that happiness requires money, or marriage, or children, there are certain ideas that our parents and culture have instilled in us so deeply that we consider them axiomatic, not beliefs at all.

Similarly, we take the laws of the physical world for granted. When we drop something, it falls to the ground. When our car is moving, we must brake to stop it. Time flows from the past to the future. All these things are so obvious, we rarely give them any thought.

In Einstein’s Dreams, physicist Alan Lightman asks us to reconsider time. The novel is a collection of vignettes, each describing how life might be if time behaved differently to the way it does in our world.

What if time wasn’t a straight line, from future to past, but bent back on itself in a circle? What if effect sometimes preceded cause? What if the passage of time brought increasing order? What if there was no time, only images? What if we only lived for one day? What if time was a sense, like sight or taste? What if it was a visible dimension? The number of alternatives Lightman considers is dazzling.

Some scenarios are chilling. What if the texture of time was sticky, causing certain people and places to become stuck at a certain moment, never to break free?

Or suppose there was a place where time stood still from the perspective of those outside it.

“Who would make pilgrimage to the center of time? Parents with children, and lovers…

Some say it is best not to go near the center of time. Life is a vessel of sadness, but it is noble to live life, and without time there is no life. Others disagree. They would rather have an eternity of contentment, even if that eternity were fixed and frozen, like a butterfly mounted in a case.”

Einstein’s Dreams is an intellectually interesting series of thought experiments, but some of the vignettes offer insight on the way we live our lives in this world too. Consider a world in which time works as it does in our world, but people have no memories.

“Late at night, the wife and husband do not linger at the table to discuss the day’s activities, their children’s school, the bank account. Instead, they smile at one another, feel the warming blood, the ache between the legs as when they met the first time fifteen years ago. They find their bedroom, stumble past family photographs they do not recognize, and pass the night in lust. For it is only habit and memory that dulls the physical passion. Without memory, each night is the first night, each morning is the first morning, each kiss and touch are the first.

A world without memory is a world of the present. The past exists only in books, in documents. In order to know himself, each person carries his own Book of Life, which is filled with the history of his life. By reading its pages daily, he can relearn the identity of his parents, whether he was born high or born low, whether he did well or did poorly in school, whether he has accomplished anything in his life. Without his Book of Life, a person is a snapshot, a two-dimensional image, a ghost…

Some have stopped reading altogether. They have abandoned the past. They have decided that it matters not if yesterday they were rich or poor, educated or ignorant, proud or humble, in love or empty-hearted— no more than it matters how a soft wind gets into their hair.”

Or consider a world where people live forever:

“Strangely, the population of each city splits in two: the Laters and the Nows.

The Laters reason that there is no hurry to begin their classes at the university, to learn a second language, to read Voltaire or Newton, to seek promotion in their jobs, to fall in love, to raise a family. For all these things, there is an infinite span of time. In endless time, all things can be accomplished. Thus all things can wait. Indeed, hasty actions breed mistakes. And who can argue with their logic? The Laters can be recognized in any shop or promenade. They walk an easy gait and wear loose-fitting clothes. They take pleasure in reading whatever magazines are open, or rearranging furniture in their homes, or slipping into conversation the way a leaf falls from a tree. The Laters sit in cafés sipping coffee and discussing the possibilities of life.

The Nows note that with infinite lives, they can do all they can imagine. They will have an infinite number of careers, they will marry an infinite number of times, they will change their politics infinitely. Each person will be a lawyer, a bricklayer, a writer, an accountant, a painter, a physician, a farmer. The Nows are constantly reading new books, studying new trades, new languages. In order to taste the infinities of life, they begin early and never go slowly. And who can question their logic? The Nows are easily spotted. They are the owners of the cafés, the college professors, the doctors and nurses, the politicians, the people who rock their legs constantly whenever they sit down. They move through a succession of lives, eager to miss nothing.”

Or what if, Lightman concludes, time was a nightingale?

“Trap one of these nightingales beneath a bell jar and time stops. The moment is frozen for all people and trees and soil caught within.

In truth, these birds are rarely caught. The children, who alone have the speed to catch birds, have no desire to stop time. For the children, time moves too slowly already. They rush from moment to moment, anxious for birthdays and new years, barely able to wait for the rest of their lives. The elderly desperately wish to halt time, but are much too slow and fatigued to entrap any bird. For the elderly, time darts by much too quickly. They yearn to capture a single minute at the breakfast table drinking tea, or a moment when a grandchild is stuck getting out of her costume, or an afternoon when the winter sun reflects off the snow and floods the music room with light. But they are too slow. They must watch time jump and fly beyond reach.”