Final Confluence
About
Einstein’s Dreams
Krista Tippett on Understanding Others 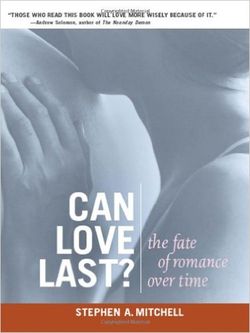 In Can Love Last? The Fate of Romance over Time, psychoanalyst Stephen Mitchell explores why romantic love usually fades over time. His surprising argument is that it's because we expend considerable effort degrading it, and for good reason.

Mitchell argues that it’s our desire to stabilise our relationships, to guarantee access to love, that undermines desire:

“The great irony inherent in our efforts to make love safer is that those efforts always make it more dangerous. One of the motives for monogamous commitments is always, surely, the effort to make the relationship more secure, a hedge against the vulnerabilities and risks of love. Yet, since respectable monogamous commitment in our times tends to be reciprocal, the selection of only one partner for love dramatically increases one’s dependency upon that partner, making love more dangerous and efforts to guarantee that love even more compelling. So we pretend to ourselves that we have, somehow, minimized our risks and guaranteed our safety— thereby undermining the preconditions of desire, which requires robust imagination to breathe and thrive…

Love, by its very nature, is not secure; we keep wanting to make it so.”

Mitchell considers several factors that are often blamed for the decline of romance in long-term relationships: that it thrives on novelty and is dispersed by familiarity; that sexual lust is difficult to reconcile with respect and admiration; that romance is inspired by idealisation, which withers with exposure to reality; that it turns too easily into contempt; and because it’s eroded by the guilt and self-pity generated by the mistakes we inevitably make.

Romance may be dispersed by familiarity, but Mitchell argues that often that familiarity is not real but constructed, to give us the feeling of security we seek. We convince ourselves that we know everything there is to know about our partners, that they cannot surprise us.

Passion doesn’t decline because it’s incompatible with respect and admiration but because it’s so arousing that we do everything we can to control it.

Romance may be fuelled by idealisation, but it doesn’t ebb because reality sets in. Mitchell argues that idealisation is not inherently a bad thing. Fantasy doesn’t necessarily cloud reality, it can also enrich and enhance it. Each offers a different viewpoint that can be useful in different contexts. However, long-term relationships are necessarily utilitarian, and an idealistic view of our partner’s abilities are not helpful in that context.

Romance isn’t eroded because love inevitably becomes contaminated by our natural human aggression. Because of the risks inherent in love, anger and even hatred are inseparable from it. Aggression is a necessary component of romantic passion. Aggression is a response to threat, and the threat of losing the person we love is constant. Romance is not degraded by the presence of aggression, but by an inability to manage it skilfully. Mitchell gives an example:

“There are many different strategies for managing the confluence of love and hate in romance. The basic underlying principle is to both express and control the aggression at the same time by diminishing or obliterating the object of desire. Aesop long ago identified this common solution as “sour grapes”: the seemingly desirable other that disappoints was rotten all along. There might be good grapes out there somewhere, but self-protection against disappointment requires constant reminders not to expect any sweetness from one’s own bunch. Denigration thus serves the purpose of maintaining equilibrium, and a chronic contempt for one’s long-term partner often feels like a necessary requirement for stability.”

Romance isn’t necessarily eroded by the mistakes we make. Mistakes are inevitable, and hence so are the guilt and pathos that flow from them. However, Mitchell argues that guilt and pathos each appear in two forms. In genuine guilt we accept responsibility for what we have done, acknowledging that nothing can be done other than bear the feelings of regret and move on. In genuine pathos we may grieve over the way we were betrayed or disappointed, but again, we move on, recognising that the future can be different. In contrast, in guiltiness we become enmeshed by our guilt, becoming stuck in attempts to buy exoneration because we cannot accept the suffering we have caused. In self-pity we become stuck in a perception of ourselves as a victim. Guiltiness and self-pity degrade passion, but genuine guilt and pathos do not.

So can romance last? Yes, says Mitchell, but not by attempting to resolve the tensions inherent in it, or by “a laboured struggle to contrive novelty”. Rather, it requires two people who are able to tolerate its fragility, understand the forces that undermine it, and a willingness to constantly build and rebuild it.