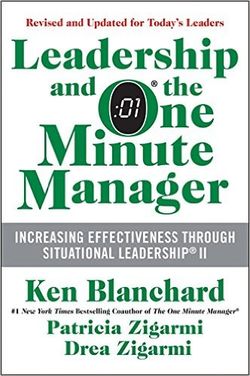 Situational Leadership, described by Ken Blanchard in his book Leadership and the One Minute Manager, is a technique that requires a manager to change his leadership style depending on the person and the situation. It requires three skills:

Blanchard likens a manager’s job to that of a teacher preparing a student for an exam:

“Once your people are clear on their goals—they have the final exam questions—it’s your job to do everything you can to help them accomplish those goals—learn the answers—so that when it comes to performance evaluation—the final examination—they get high ratings—As.”

Blanchard argues that managers should set between three and five goals, which should tie into the goals of the team and the organisation. Each goal must be SMART – Specific, Motivating, Attainable, Relevant and Trackable. The manager and their report should also discuss and agree what the individual’s current “development level” is for each goal, as this will determine the kind of support the manager will need to provide.

Development level is a combination of competence and commitment. Competence is the person’s skill at the task, gained through learning and experience. Commitment encompasses his confidence in his ability and his enthusiasm for doing the task well. Any time someone is not performing a task well, says Blanchard, it’s either a competence or a commitment problem.

Blanchard identifies four distinct development levels. Usually people start at level D1, the “enthusiastic beginner”, characterised by low competence but high enthusiasm. As they begin to realise what they don’t know, motivation may fall, and they move into stage D2, the “disillusioned learner”. Here, both their competence and commitment are low. With perseverance and support, however, they can move to stage D3, a “capable but cautious contributor”. Their competence has grown but they may still lack confidence in their ability. Finally, they can move into stage D4, the “self-reliant achiever”, where both their competence and commitment are high.

Once goals have been set, the manager’s job changes to one of day-to-day coaching. This is about providing a combination of direction and support. Direction involves making decisions, teaching, observing and providing frequent feedback. Support involves listening, involving the individual in decisions, facilitating and providing encouragement. This leads to four possible leadership styles:

STYLE 3—SUPPORTING
Low Directive Behavior and High Supportive Behavior
The leader and the individual make decisions together. The role of the leader is to facilitate, listen, draw out, encourage, and support.

STYLE 4—DELEGATING
Low Directive Behavior and Low Supportive Behavior
The individual makes most of the decisions about what, how, and when. The role of the leader is to value the individual’s contributions and support his or her growth.”

Blanchard argues that how much direction and support a person needs depends on their competence at and commitment to the goal they are working on – in other words, on their development level for that goal.

“Directing (Style 1) is for enthusiastic beginners who lack competence but are enthusiastic and committed (D1). They need direction and frequent feedback to get them started and to develop their competence.

Coaching (Style 2) is for disillusioned learners who have some competence but lack commitment (D2). They need direction and feedback because they’re still relatively inexperienced. They also need support and acknowledgment to build their self-confidence and motivation, and involvement in decision making to restore their commitment.

Supporting (Style 3) is for capable but cautious performers who have competence but lack confidence or motivation (D3). They do not need much direction because of their skills, but support is necessary to bolster their confidence and motivation.

Delegating (Style 4) is for self-reliant achievers who have both competence and commitment (D4). They are able and willing to work on a project by themselves with little direction or support.”

Using the wrong style can be disastrous. For example, using delegation with an individual with low competence is more like “abdicating” than “delegating”. Without direction, the individual’s lack of competence can result in them unintentionally creating problems, especially if they are a D1 and unduly confident in their own abilities too. Similarly, a D4 who is given a lot of direction is likely to feel that they are not trusted, and become resentful as a result.

Situational Leadership does not stigmatise inexperience or lack of knowledge. It recognises that people may be at different development levels at different tasks – a D1 at some things, perhaps, but a D4 at others – and focuses on what the manager needs to do to move the individual to higher development levels. It’s about working side-by-side with people. “Your goal as a manager should be to gradually increase the competence and confidence of your people so that you can begin to use less time-consuming styles—supporting and delegating—and still get high quality results,” says Blanchard.