Final Confluence
About
Mark Vernon on Friendship, Love and Sex
Alain de Botton on Why We Marry 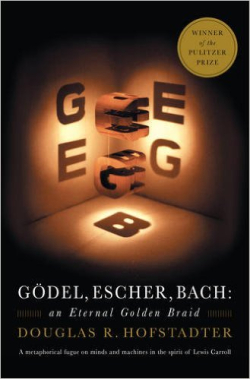 At the core of Hofstadter’s beliefs about consciousness lies the idea of a “Strange Loop”:

“The "Strange Loop" phenomenon occurs whenever, by moving upwards (or downwards) through the levels of some hierarchical system, we unexpectedly find ourselves right back where we started.”

“Gödel says that no sufficiently powerful formal system can be perfect, in the sense of reproducing every single true statement as a theorem... The fact that truth transcends theoremhood, in any given formal system, is called "incompleteness" of that system.”

While Gödel’s Theorem is about mathematical systems, an analogy can be drawn with the English language. This can be thought of as a system with a set of axioms (words) and a set of rules (grammar) for combining those words into sentences. Sentences can be constructed that are true (“the sky is blue”) or false (“ice is hot”). Gödel’s Incompleteness Theorem is analogous to saying it is impossible to create a book that contains every true statement that could be made in English, regardless of how large that book is.

The gist of the proof is as follows. Consider the sentence, “This sentence is not in this book”. Would that sentence be found in our hypothetical book, or not?

Hofstadter also notes that whether a statement is true or false is not inherent in the statement itself – it depends entirely on the interpretation we choose for the symbols. For example, consider, “the sky is blue”. This is only true if we interpret “the sky” as “the sky on planet Earth”. Were we to interpret “the sky” as “the sky on Mars”, the statement would be false. This mapping between the symbol “sky” and the concept of the thing above our heads is called an “isomorphism”. Indeed, the only thing that gives the inherently meaningless squiggles S-K-Y meaning is our recognition that they refer to the thing above our heads. As Hofstadter puts it, “Meaning is an automatic by-product of our recognition of any isomorphism”.

Whether a system is internally consistent also depends on the interpretation chosen for it. For example, consider a system with “1p1q2” as an axiom. We might choose to interpret p as “plus” and q as “equals”. Now suppose we decided to create a new system by adding the axiom “1p1q4”. Isn’t this new system inherently inconsistent? We might think so, since not only is 1+1 not equal to 4, we now seem to have two axioms that disagree with each other. However, we only have a problem because we have retained the same interpretation for the symbols p and q. Reinterpret the symbols appropriately (for example, by reinterpreting q as “less than or equal to”), and our system is consistent and meaningful once more.

Later in the book, Hofstadter offers a great visualisation of a multi-level Strange Loop:

“Think of chess. Clearly the rules stay the same, just the board position changes on each move. But let's invent a variation in which, on your turn, you can either make a move or change the rules [according to some constraints]...

Now we have two layers of rules: those which tell you how to move pieces, and those which tell how to change the rules... You could even express rules and metarules as positions on auxiliary chess boards...

Now we can have any number of adjacent chess boards: one for the game, one for rules, one for metarules, one for metametarules, and so on, as far as you care to carry it. On your turn, you may make a move on any one of the chess boards except the top-level one, using the rules which apply (they come from the next chess board up in the hierarchy). Undoubtedly both players would get quite disoriented by the fact that almost anything - though not everything! - can change...

Now it is possible to go considerably further in removing the pillars by which orientation is achieved. One step at a time... We begin by collapsing the whole array of boards into a single board. What is meant by this? There will be two ways of interpreting the board: (1) as pieces to be moved; (2) as rules for moving the pieces. On your turn, you move pieces - and perforce, you change rules!... The distinction between game, rules, metarules, metametarules, has been lost. What was once a nice clean hierarchical setup has become a Strange Loop... There are still different levels, but the distinction between "lower" and "higher" has been wiped out.”

Hofstadter argues that consciousness arises from a similar tangling of different levels in the brain:

“My belief is that the explanations of "emergent" phenomena in our brains - for instance, ideas, hopes, images, analogies, and finally consciousness and free will - are based on a kind of Strange Loop, an interaction between levels in which the top level reaches back down towards the bottom level and influences it, while at the same time being itself determined by the bottom level. In other words, a self-reinforcing "resonance" between different levels... The self comes into being at the moment it has the power to reflect itself.”