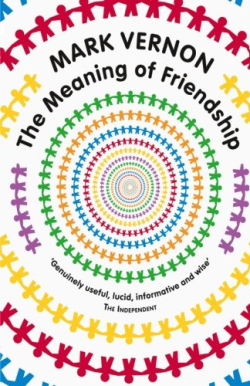 “A friendship which includes a sexual element is the best sort of relationship that many people hope to have,” says Mark Vernon in The Meaning of Friendship. “The downside is that sex can clearly imperil friendships by its possessiveness or its inappropriateness.”

Conversely, friends who sense a sexual undercurrent developing between them may hesitate to pursue those feelings lest they put the friendship at risk.

However, even just the possibility of such feelings developing can cause problems:

“Imagine a man and woman becoming friends at work - good friends - and deciding to go out for dinner together as an apparently natural extension of the friendship. Then, as they're sat across the table from each other - starched linen, candles and a rose between them - they start to feel awkward. Unwittingly, they have been drawn into uncharted waters as dinner for two is the sort of thing that lovers do, not friends. The evening is one of embarrassment, and the friendship flounders. What's happened is that cultural assumptions about the activities associated with a sexual relationship have imperilled a friendship quite as effectively as any actual erotic attraction itself…

However, sex doesn’t just imperil the friendship between lovers, it can jeopardise their other friendships too:

“In today's world, there is a myth of romantic love based upon the idea that two lovers become one flesh, a totalisation of life in the other, supremely enacted in sexual ecstasy which is symbolic of that union. The myth or ideal tends to exclude others, not because lovers do not want friends, but because it tells them that their friends are incidental - pleasant but non-essential adornments to the lover's life together. Although few people in real life believe the myth in its entirety, it is difficult to ignore it entirely too...

Think of the estrangement that can come about between friends after one of them marries another... Or recall just how hard it can be to sustain a friendship when your friend started a new sexual relationship..."

Vernon suggests this may be because the partiality of friendship may be seen as a threat to the supposed primacy of the sexual relationship.

“Is there not a steely strand in the ethic of modern marriage which repels anything that compromises the unconditional commitment of husband and wife - 'forsaking all others', as the service says? Close friendship can count as infidelity quite as much as a fling or affair.”

To my mind, this is one of the great tragedies of modern marriage. The idea that one person can satisfy all of our sexual, emotional and intellectual needs is infantile. Our notions of exclusivity, indoctrinated in us by our culture, all too often cut us off from a richer, albeit more complex, tapestry of relationships that have the capacity to profoundly improve our lives.

At the root of the problem is our tendency to value sexual relationships above mere friendships. We often talk about how a friendship can blossom into “something more”.  Yet by doing so, we have created an incentive to misunderstand our feelings:

“In a culture where sexual consummation is seen as the highest expression of love that two people can hope for, a fascination for someone is easy to mistake for falling in love, even when it is simultaneously obvious that a sexual relationship would be inappropriate, unsustainable and possibly ruinous of the friendship.”

“[Aristotle] assigns close friendship top place in the hierarchy of human relationships, regarding it as a key ingredient in any flourishing life. There's a place for 'friendly lovers' too, if lower down: they can hope for some contentment. They belong in his second category of friendship, the kind that form because of some mutual shared pleasure, in this case that being sex...”

“Perhaps friendship should assert itself more strongly in our romance obsessed world... For contra the myth, there is a love that does not desire to possess. It is called friendship. It loves the other, and wants them both to be free.”