Final Confluence
About
Alain de Botton on What Children Can Teach Us About Love
The Wedding Vow: The Promise it's Okay to Break

Alain de Botton on Changing our Expectations of Marriage 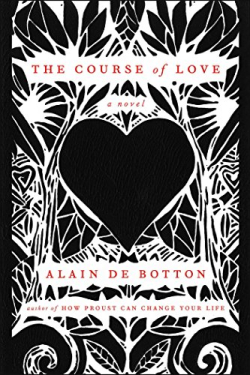 Alain de Botton's The Course of Love is an unsentimental - some might say pessimistic - look at modern marriage. Writing in the latest issue of The Philosopher’s Magazine, Skye Cleary suggests that the book's main weakness is "that it napalms the Romantic ideal so successfully that it’s not clear that the institution of marriage is worth rescuing". But De Botton doesn't argue that we shouldn't get married, just that we should enter it with much more realistic expectations.

“Once, you were deemed ready for matrimony when you’d reached certain financial and social milestones: when you had a home to your name, a trousseau full of linen, a set of qualifications on the mantelpiece, or a few cows and a parcel of land in your possession. Then, under the influence of Romantic ideology, such practicalities grew to seem altogether too mercenary and calculating, and the focus shifted to emotional qualities. It came to be thought important to have the right feelings, among these a sense of having hit upon a soul mate, a faith in being perfectly understood, a certainty of never wanting to sleep with anyone else again. The Romantic ideas are, he knows now, a recipe for disaster.”

Instead, de Botton offers a quite different set of criteria.

One, you’ve given up on perfection:

“Choosing a person to marry is hence just a matter of deciding exactly what kind of suffering we want to endure rather than of assuming we have found a way to skirt the rules of emotional existence. We will all by definition end up with that stock character of our nightmares, “the wrong person.” This needn’t be a disaster, however. Enlightened romantic pessimism simply assumes that one person can’t be everything to another. We should look for ways to accommodate ourselves as gently and as kindly as we can to the awkward realities of living alongside another fallen creature. There can only ever be a “good enough” marriage.”

Two, you don’t expect to be fully understood:

“Love begins with the experience of being understood in highly supportive and uncommon ways. They grasp the lonely parts of us; we don’t have to explain why we find a particular joke so funny; we hate the same people; we both want to try that rather specialized sexual scenario. It cannot continue. When we run up against the reasonable limits of our lovers’ capacities for understanding, we mustn’t blame them for dereliction. They were not tragically inept. They couldn’t fully fathom who we were—and we did likewise. Which is normal. No one properly gets, or can fully sympathize with, anyone else.”

Three, you admit that you are crazy:

“It’s profoundly counterintuitive for us to think of ourselves as mad. We seem so normal and mostly so good—to ourselves. It’s everyone else who is out of step . . . and yet, maturity begins with the capacity to sense and, in good time and without defensiveness, admit to our own craziness. If we are not regularly deeply embarrassed by who we are, the journey to self-knowledge hasn’t begun.”

Four, you understand that marriage itself is deeply flawed:

“Rabih is ready for marriage because he has understood that it isn’t Kirsten who is difficult. They seem “difficult,” of course, within the cage of marriage when they lose their tempers over such petty things: logistics, in-laws, cleaning duties, parties, the groceries . . . But it’s not the other person’s fault, it’s what we’re trying to do with them. It’s the institution of marriage that is principally impossible, not the individuals involved.”

Five, you are prepared to love, rather than be loved:

“We speak of “love” as if it were a single, undifferentiated thing, but it comprises two very different modes: being loved and loving. We should marry when we are ready to do the latter and have become aware of our unnatural—and dangerous—fixation on the former. We start out knowing only about “being loved.” It comes to seem, quite wrongly, the norm. To the child, it feels as if the parent were just spontaneously on hand to comfort, guide, entertain, feed, and clear up while remaining almost constantly warm and cheerful. We take this idea of love with us into adulthood. Grown up, we hope for a re-creation of what it felt like to be ministered to and indulged. In a secret corner of our mind, we picture a lover who will anticipate our needs, read our hearts, act selflessly, and make everything better. It sounds “romantic,” yet it is a blueprint for disaster.”

Six, you understand that sex cohabits uneasily with love:

“The Romantic view expects that love and sex will be aligned. We are properly ready for marriage when we are strong enough to embrace a life of frustration.”

Seven, you accept that in some ways your partner is better than you, and you want to learn from them:

“We should bear having things pointed out to us. And at other moments we should be ready to model ourselves on the best pedagogues and deliver our suggestions without shouting or expecting the other simply to know. Only if we were already perfect could the idea of mutual education be dismissed as unloving.”

Eight, you accept that, deep down, you and your partner are not compatible:

“The Romantic vision of marriage stresses the importance of finding the “right” person, which is taken to mean someone in sympathy with the raft of our interests and values. There is no such person over the long term. We are too varied and peculiar. There cannot be lasting congruence. The partner truly best suited to us is not the one who miraculously happens to share every taste but the one who can negotiate differences in taste with intelligence and good grace. Rather than some notional idea of perfect complementarity, it is the capacity to tolerate dissimilarity that is the true marker of the “right” person. Compatibility is an achievement of love; it shouldn’t be its precondition.”

Nine, you accept that the love stories in books and movies and TV shows bear little relation to reality:

“By the standards of most love stories, our own real relationships are almost all damaged and unsatisfactory. No wonder separation and divorce so often appear inevitable. But we should be careful not to judge our relationships by the expectations imposed on us by a frequently misleading aesthetic medium. The fault lies with art, not life. Rather than split up, we may need to tell ourselves more accurate stories—stories that don’t dwell so much on the beginning, that don’t promise us complete understanding, that strive to normalize our troubles and show us a melancholy yet hopeful path through the course of love.”

Is de Botton too pessimistic? I don’t think so. As he puts it himself, “Melancholy isn’t always a disorder that needs to be cured. It can be a species of intelligent grief which arises when we come face-to-face with the certainty that disappointment is written into the script from the start.” If we entered marriage with more realistic expectations perhaps there would be fewer divorces and fewer children shuttling between two houses with no one place to call home.