Amatonormativity and the Case for Marriage Reform 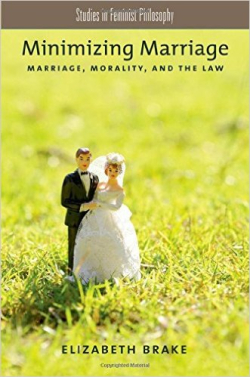 Heteronormativity is the belief that sexual and marital relations are only appropriate between a man and a woman. It’s a belief that has been embedded in our culture for thousands of years. Only now is it being challenged. However, there is a more fundamental belief about marriage and sexuality that continues to be taken for granted. In Minimizing Marriage: Marriage, Morality, and the Law, Elizabeth Brake calls this amatonormativity. It’s the belief that a normal relationship is exclusive, amorous, long-term, and involves the partners prioritising each other above everything else; that obtaining such a relationship is a universally shared goal; and that such a relationship should be preferred to other relationship types.

Evidence for amatonormativity is everywhere. It’s in the concerned parental questions about when you’re going to find someone nice and settle down. It’s in the raised eyebrows that greet you when you dine alone, put friendship above romance, bring a friend to a formal event or attend alone, or show no interest in finding romance. Such behaviour is considered odd. That’s amatonormativity.

Adults whose lives don’t follow the amatonormative norm face discrimination. They are subject to negative stereotyping, including accusations of being immature, selfish, irresponsible, a “man-child” or a “crazy cat lady”. Their friendships are denied the social recognition given to those in amorous relationships. They are denied access to the privileges afforded to the married, for example the ability to extend spousal immigration or hospital visiting rights to a close friend instead.

However, amatonormativity is so entrenched that most people consider this justified preferential treatment rather than wrongful discrimination. It is widely believed that amatonormative relationships are superior because they require commitment and promote mutual care. Brake disagrees. Such relationships may require the partners to make a commitment to each other, but they do not guarantee that they will have a commitment, as the divorce rate attests. Moreover, commitment is not desirable in itself. It may facilitate the achievement of complex, long-term goals, but such goals may have no more inherent value than short-term goals that do not require commitment. Likewise, abuse and unidirectional caring can be found as often in amatonormative relationships as in other ones.

Amatonormativity also has negative effects on the lives of those who subscribe to it. “Amatonormativity sustains the belief that marital and amorous relationships should be valued over friendships, and this undermines the attempt to pursue enduring friendships,” Brake writes. “Pressures to enter amorous love relationships likely result in individuals viewing friendships as less valuable than they might otherwise, and in some cases choosing less fulfilling relationships, given their idiosyncratic needs and preferences, than they otherwise might.” Amatonormativity is also responsible for our unrealistic belief that one person should be able to satisfy all our emotional, erotic, intellectual and companionship needs, an expectation that frequently causes unhappiness.

Marriage is not necessary to benefit from amatonormative privilege, but it is usually sufficient for it. Indeed, argues Brake, our current conception of marriage is a major cause of amatonormativity. By holding up one kind of relationship as special, and explicitly privileging it, our culture encourages people to pursue it.

Because marriage is neither necessary nor sufficient for the goods commonly attributed to it, is not inherently more valuable than other kinds of relationship, and actively produces harm, Brake argues that it is a matter of justice to reform it.